One of the fastest ways to kill your windows is to let hard water deposit into the glass. It’s a good reason to get a professional window cleaning done. But just what is hard water and why can it ruin your windows?

Hard water is water that has other compounds in it. Usually, this will consist of calcium and magnesium, but others might be there as well. When they splash on a window, the water will evaporate with time. This leaves the deposits of minerals. 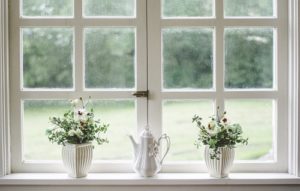 In most cases, you won’t even notice the buildup. It piles on little by little, until you realize there’s a huge calcium or limescale on the window that won’t be easy to remove.

Now let’s take a look at how hard water destroys your windows.

Stage one is the infection. This is when the hard water gets onto the surface, usually from a garden hose or sprinkler. The water evaporates, leaving the spots behind. At this point, you might still be able to scrub the residue off normally.

Stage two is when the deposit has begun to build up.

At this point, it looks somewhat transparent, pasty. It is difficult to remove it at this point because it’s much harder and more set on the glass. A window scraper and some acid are going to be useful. Light, abrasive glass cleaner can also work.

At the third stage, you have a serious problem.

Most of the time, you’ll notice this happen on shower glass and doors because of the increased exposure to water. However, the home’s windows are also at risk.

Scraping isn’t going to work. The scale has built up and isn’t going away with normal methods. You are going to need a special buffer, along with the use of abrasive pads. Doing this puts the risk of more damage if you don’t do this correctly.

Like many problems, if left ignored, hard water can seriously ruin your windows. Unfortunately, because of how it builds up, most people don’t realize this is happening until it becomes obvious.

The best way to avoid hard water buildup is to get professionals. They have specialized products and tools that mean hard water stains won’t be an issue.